Not to be confused with Kenora.
This article is about a town in Saskatchewan, Canada. For other uses, see Canora (disambiguation).

Canora is a town, located at the junction of highways No. 5 and 9 in east central Saskatchewan, about 50 km north of Yorkton. It is centrally located on the corners of four adjacent rural municipalities, including the RM of Good Lake. The community is home to approximately 3,500 residents and is part of the Canora-Pelly electoral district. The community was founded along the Canadian Northern Railway tracks - one of the companies that evolved into the Canadian National Railway (CN), and two CN freight lines (one east-west branch line to Saskatoon and one line going north) still run through Canora. The Canora railway station, downtown on the CN east-west line before the switch to the northbound line, is served by Via Rail on its passenger service from Winnipeg to Churchill, Manitoba.[4]

The area around Canora was first settled by Europeans in the late 19th century by Doukhobors, Romanians, and Ukrainians. The first ranchers arrived in the area in 1884. Two years later, in 1886, the land was officially surveyed by the Dominion government. The first Ukrainian block settlement in Saskatchewan was established in 1897 when 150 families arrived in the Canora District from Western Ukraine.[8] In 1904, the Canadian Northern Railway laid tracks through the area and in April of that same year, a post office was opened, a school district established and a town site was surveyed. A year later, in 1905, Canora was incorporated as a hamlet on the site of the train station, which now serves as the town's museum and tourist information centre. In 1908, Canora became a village.[9] The name Canora, is derived from the first two letters of the words "Canadian Northern Railway."[10] By 1910, with a growing population of around 400, Canora had officially achieved the status of a town. In 1912, the first Canora Chamber of Commerce was established.[11] Over the next few decades, the community experienced rapid growth with population levels remaining stable even through the Great Depression. Canora's population peaked in 1966 with about 2,734 residents.

Doukhobors in Canora were key to the town's development and, under the auspices of the Doukhobor Trading Company, undertook an ambitious building program on Second Avenue East, where they established several communally-run enterprises from 1907 to 1918.5[9] 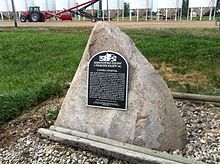 A historical marker for the old Canora Hospital.

Lakes & Parks - Canora is known as the "Heart of Good Spirit Country" as a result of its proximity to several lakes and parks, including Crystal Lake, Good Spirit Lake and Duck Mountain Provincial Park. The area is home to Saskatchewan's greatest number of golf courses per-capita and boasts one of the highest tee traffic counts in the province.

Lesia Statue[13] - Lesia is a 25-foot, 4,000 lb statue that honours the descendants of the Ukrainian and Eastern European settlers who made Canora their home and serves as welcome sign to visitors. The plaque on the base of the statue reads:

"Welcome - Veetayemo This traditional welcome with the bread and salt to all visitors is a universal custom and practice among Ukrainians and most Eastern European people, whose descendants have settled throughout Canada. To commemorate the 75th Anniversary of the Province of Saskatchewan and the Town of Canora, this symbol has been erected through the efforts of the Canora Chamber of Commerce, the Town of Canora, the Province of Saskatchewan and many other organizations and individuals. Canora Welcome Statue Committee".

The Lesia statue was created in 1979 by Canora residents Nicholas and Ores Lewchuk and took over a year to complete. The statue features a woman dressed in traditional Ukrainian costume, who is offering visitors a loaf of braided bread, called Kolach along with salt. For Ukrainians, bread is a highly respected food, and salt is viewed as a symbol of a long, enduring friendship. As part of a customary greeting, a loaf of bread, crowned with a salt cellar is set upon an embroidered ritual cloth. Guests are then offered a chunk of bread to dip into the salt. Lesia  was officially unveiled on September 3, 1980 by Right Honorable Edward Schreyer, Governor General of Canada to honour Saskatchewan's 75th anniversary.[14]

Station House Museum - Canora's Visitor Information Centre and the CN Station House Museum is located in the oldest Class 3 railway station still operating in Saskatchewan.  It was erected in 1904 and its exhibits include displays of CN Rail memorabilia, pioneer artifacts, local art and souvenirs  Information regarding rail tours to Churchill, Manitoba is available at the museum with Via Rail service to Winnipeg and Churchill available twice weekly.

Hugh Waddell Memorial (Canora Hospital) Site - Is a cairn dedicated to Canora's first hospital. Mary Waddell of Peterborough, Ont., donated $25,000 to the Presbyterian Church for construction of a hospital in her husband's name. In 1913, the Hugh Waddell Memorial Hospital was built on land donated by Christian R. Graham. It was erected by the Presbyterian Home Mission Society, one of two mission hospitals in Saskatchewan. Admitting patients in March, the hospital was officially opened on June 18, 1914, with 60 beds. It operated as a mission hospital until 1944 when it was purchased by the Canora Union Hospital Board. In 1950, a new wing was added, increasing its capacity to 82 beds. The hospital closed on July 4, 1968, and a commemorative cairn was erected in 2000.[14]

Trails - Canora boasts more than 150 km of trails, including over 144 km of marked and groomed snowmobile trails and more than 10 km of walking, cycling, jogging and cross-country ski trails. Trail surfaces vary from pavement to gravel and even include a foot bridge. These trails include; the Trans Canada Snowmobile Trail, with over ninety miles of signed and groomed trails in the immediate area and access to numerous other snowmobile trails, the Trans-Canada Trail, which f will take you to some of the most popular out-of-town attractions. Westward travellers will come upon the Good Spirit Lake Provincial Park, Burgis Beach and Canora Beach; while eastward travellers will discover Duck Mountain Lake Provincial Park and the National Doukhobor Heritage Village.[18] The Urban Habitat Trail that was created by the River Ridge Wildlife Club and formed in-cooperation with the Town of Canora, Ducks Unlimited Canada and the PFRA. This trail is an educational and interpretive trail that highlights the natural habitat, wildlife and plant species of the area. The 8.6 km long Walking Trail that winds through Canora's natural landscape.

Water - Canora was judged to have the best-tasting municipal water in Canada at the 13th annual international water tasting competition held in 2003 in Berkeley Springs, West Virginia, U.S. Canora's water, supplied by several ground wells northeast of the community, also placed fourth internationally at the competition that received entries from eight countries and 23 states. Free samples of this great-tasting water are available at the CN Station House Museum during the summer months.

Nicholas Lewchuk Property - The Nicholas Lewchuk Property is a Municipal Heritage Property that features a house, a ferris wheel, an airplane swing and two midway trailers. The Lewchuk family emigrated from the Ukraine when Nicholas was a child and homesteaded near Canora in 1902. Lewchuck's eclectic interests came to include vaudeville, publishing, magic, photography, design, recording and horticulture. In the 1920s, he founded a travelling vaudeville show and carnival that toured the prairies and western Ontario for the next five decades. Lewchuk designed and built the carnival rides himself, the “airplane swing” being the first. Around 1908, Lewchuk's father built the house and Nicholas lived here during the “off-season” for most of his life. From an office off the main entrance, he wrote and edited English and Ukrainian periodicals and ran the seed catalogue business founded by his mother. In 1968 the rides, trailers and animal pens from the travelling carnival were set up permanently in the yard behind the house. Known as the “Fun Spot,” Lewchuk operated his midway intermittently for the next few years. Lewchuk continued his publishing, editing and horticultural activities intermittently until his death in 1990.[19][20]

John Hnatyshyn, Canadian senator and lawyer born in Canora in 1907.[22]

Harry Fain, a lawyer who represented clients such as Elvis Presley, Carey Grant, Lee Majors, Rod Steiger and Ali MacGraw, was born in Canora in 1908.

Florence Storgoff, a political and Freedomite activist, was born in Canora in 1908.[23]

Allan McKinnon, a Canadian politician, was born in Canora in 1917.[24]

Warner Jorgenson, a Canadian politician, was born in Canora in 1918.[25]

Lorne Kopelchuk, a Canadian politician, was born in Canora in 1938.[26]

Cliff Koroll, a National Hockey League player and coach and Saskatchewan Sports Hall of Famer was born in Canora in 1946.[27]

Tyler Wright, a National Hockey League player and coach, was born in Canora in 1973.[29]

Cam Severson, a National Hockey League player was born in Canora in 1978.[30]

Terry Dennis, a Saskatchewan politician, was born in Canora.[31]

Canora is protected by the Canora-Sturgis RCMP detachment. The detachment has 8 members, between Canora and Sturgis.[32]

Canora and area is served by a full-time Ambulance service – consisting of 3 PCP's, 3 ICP's, and two ACP's.[33]

Canora's fire protection is provided by 21 professionally trained and certified paid-per-call staff. Along with fire protection they also provide rescue services such as vehicle extrication. Their services are also utilised in surrounding Rural Municipalities.[34]

Canora is located at the junction of east-west Saskatchewan Highway 5 and north-south Saskatchewan Highway 9. The town also serves as a hub for two freight lines of the Canadian National Railway. The downtown Canora railway station is served by Via Rail passenger service as a stop on the Winnipeg–Churchill train.[4]

The Canora Airport is a grass landing strip located adjacent to the town with no permanent terminal facilities.[35]